As a followup to the Gross Science panel at Phoenix Fan Fest, here are some noted insects of the Sonoran Desert. 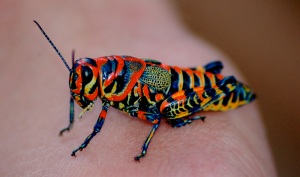 Feeds on snakeweed and desert broom, making it distasteful to predators. 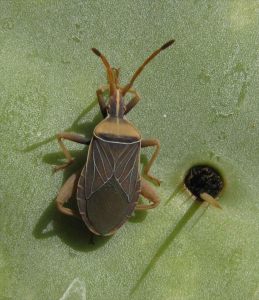 Cause white spots to appear on cacti due to their feeding.

Different species emerge at disparate times of the year and males sing distinct songs. Desert cicada life cycles are 3-7 years in contrast with Eastern cicadas’ 13-17 years. Desert species are the only known insects who can sweat. 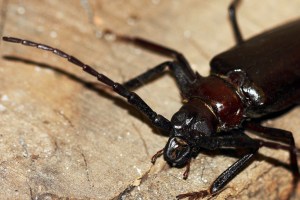 Larvae feed on roots–sometimes palo verde or mesquite trees–for up to three years. 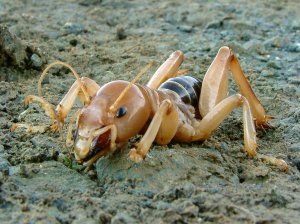 Sometimes know as Child of the Earth or Skull Insect, they are cousins of katydids and wetas and nocturnal predators. 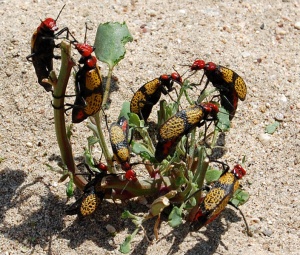 Blood contains cantharidin which causes blisters. They pupate in native been nests. 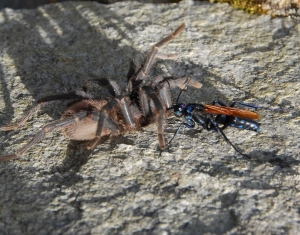 Females hunt tarantulas for food for her offspring. Usually nectar feeds and non-aggressive, never swat at them as their sting is very painful. 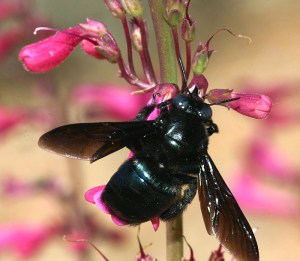 From Steve Buchman, The Bee Works:

These gentle giants get their name from their life history habits of excavating precisely rounded galleries inside wood. Using their broad, strong mandibles (jaws), they chew into dead but non-decayed limbs or trunks of standing dead trees. Some species, like the eastern Xylocopa virginica, occasionally take up residence in fence posts or structural timbers, especially redwood, and become a minor nuisance. Inside their rounded branched galleries, they form pollen/nectar loaves upon which they lay their giant eggs (up to 15 mm long). The female forms partitions between each egg cell by mixing sawdust and her saliva together. These partition walls are very similar to particle board.

sects of the Southwest by Carl E. Olson. “Olson’s love for insects began when he and his older brother collected caterpillars and silk moths in the Ohio countryside. While terminating insects with Raid is the initial instinct of many people, Olson has dedicated his career to using alternative ways to solve the insect problems people face. He is a believer in programs promoting ‘integrated pest management,’ or IPM.”

Learning About and Living With Insects of the Southwest: How to Identify Helpful, Harmful and Venomous Insects by Floyd G. Werner & Carl Olson. Excerpt, The Bugman’s Philosophy by Carl Olson:

As I wander about this desert, I now try to figure out what insects are around making this world so delightful to me. I may become an oasis in the desert to the creatures. If that fly comes to my nose and becomes an irritation, I may shoo it away but I know why it comes to me. Life won’t always be as I wish it to be, so maybe I can return a little of me through some other life forms. Peace of mind comes in many ways, but to me it comes in the form of diverse shapes and sizes of all those microcreatures surrounding me in life.

The Sting of the Wild by Justin Schmidt. The world of stinging insects through their eyes from the author of the Schmidt sting pain index.

Cactus Desert (One Small Square) by Donald Silver & Patricia Wynne. “It’s a sun-scorched world where clouds rarely come and nothing seems to move. That is, until children ages 6 – 9 up look a little closer to find tortoises, toads, and lizards, not to mention the scary rattlesnake and scorpion. Here, plants send their roots deep into the earth to find water, beetles stand on their head and shoot a stinky spray to fight off enemies, and roadrunners whiz by sleepy turtles and nervous desert mice on their way to … where?”